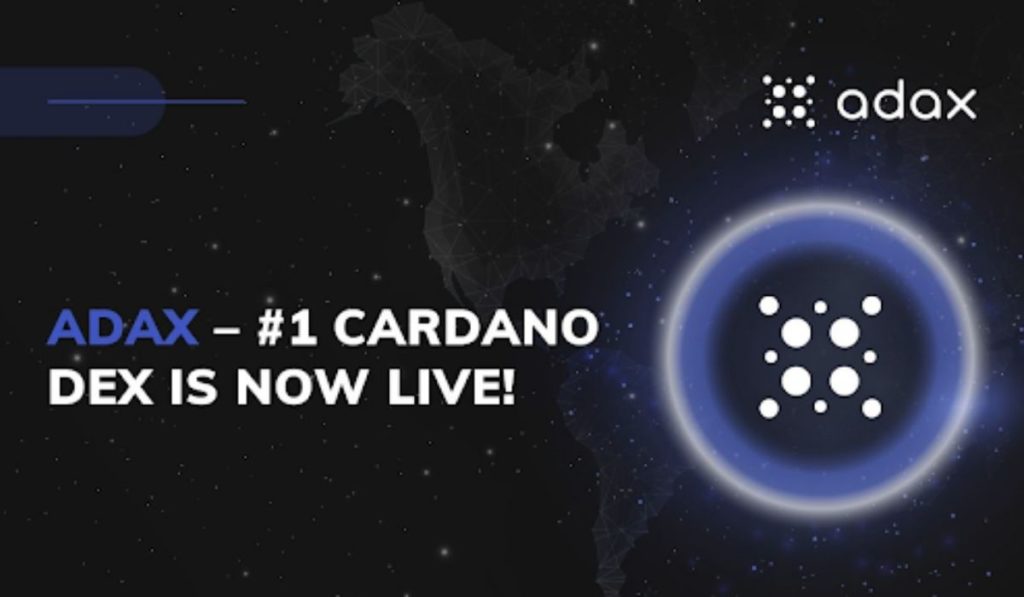 Since Cardano first attracted the attention of DeFi specialists, its community has been betting on which Decentralized Exchange (DEX) will become the ecosystem’s Uniswap or PancakeSwap. We know how high the stakes have been for the contenders because we are the risk-takers in this campaign. And it’s for that reason that we’re overjoyed to announce that the race is starting to heat up – ADAX DEX v1.0 is now LIVE!

ADAX continues to set the bar high, contributing significantly to the Cardano ecosystem and delivering on long-term commitments. The order-book approach is used by ADAX DEX v1.0 to enable totally non-custodial and censorship-resistant trading. It is governed by a decentralization ideology. Users of the ADAX platform can now instantaneously perform smart contract-based trades at a fraction of the cost of the Ethereum network.

This first product launch is a significant step forward in the development of our project and demonstrates the team’s tremendous dedication. We are finally able to provide our vibrant community with an intricate piece of infrastructure that is critical to the long-term prosperity of the Cardano ecosystem, after six months of arduous work, too many frustrating delays beyond our control, and more cups of coffee than should be humanly possible to consume.

ADAX DEX v1.0 adds a slew of new features that the Cardano community has been clamoring for. Our DEX is significantly different from our competitor’s, since it is based on an order-book approach with on-chain swap execution and focused liquidity orders.

Using Plutus smart contracts, our developers have designed a bespoke PAB solution that ensures complete decentralization. We’re also breaking down each order into smaller UTXOs, which avoids congestion and eliminates any concurrency difficulties. Our user experience team has spent many hours ensuring that the ADAX DEX v1.0 user experience is both intuitive and seamless. ADAX is also working to ensure that wallet integration is prevalent. ADAX DEX v1.0 will attempt to quickly incorporate GeroWallet and CCVault in the days following the initial launch, in addition to full support for Nami Wallet.

ADAX DEX v1.0 will also include a novel trading feature, allowing traders to re-calibrate their investments based on early indicators of changing’social sentiment,’ thanks to our exclusive relationship with Stockgeist.AI, a market sentiment monitoring platform. ADAX’s traders will be able to tell which tokens are going hot and which are cooling down by using data pulled from social media sites like Twitter, Facebook, Reddit, and Discord, extending their lead over competitors even further.

We owe a huge debt of gratitude to our early testers, whose input has been vital in ensuring that our product completely satisfies the expectations of the Cardano community.

We have been both tremendously excited and humbled by the amount of outside support we have gotten during our journey. Following a highly successful IEO on ExMarkets and an overcrowded private sale.

We’ve also forged alliances with projects like Netvrk and BlackDragon, and garnered support from some of the industry’s most influential figures, like Roger Ver, dubbed the “Bitcoin Jesus,” and Mate Tokey, a co-founder of Bitcoin.com. GeroWallet, the first multi-functional Cardano wallet; VyFinance, a unique DeFi protocol integrating an auto-harvester into the Cardano Chain using their own neural net; World Mobile, a provider of innovative blockchain telecommunications infrastructure; and Charli3, a decentralized oracle within the Cardano ecosystem, have all recently joined our list of valued partnerships.

It’s a women’s world! Bakkt commissioned a study that shows women are investing in cryptocurrencies and closing the gender gap. The paper, titled “Women & Crypto,” shows “women are now outpacing men as first-time purchasers.” No surprise there, if you’re paying attention. It’s useful to have concrete numbers, though. A self-described “global regulated ecosystem for […]

A project using bridges to connect different metaverses is soaring in price while the rest of the crypto world enters murky waters. Magic (MAGIC) is the native token of Treasure, a project which bills itself as the “Metaverse Bridgeworld” while harnessing the features of non-fungible tokens (NFTs), decentralized finance (DeFi) and gaming. According to the […]

The “delta capitalization” model of Bitcoin may suggest that around $15k could be a possible bottom for the crypto’s price. Past Delta Cap Trend Shows Bitcoin May Still Face More Decline Before A Bottom As explained by an analyst in a CryptoQuant post, the BTC market cap is now below the realized cap, but still above the delta cap. Before taking a look at the data, it’s best to first get a basic grasp of the three major capitalization models for Bitcoin. The normal market cap is calculated by just taking the total number of coins currently in circulation and multiplying it by the price of BTC right now. The “realized cap” works a bit differently; instead of multiplying all the coins by the same price, this model weighs each coin by the price it was last moved at. Related Reading | USDC Exchange Reserves Rise As Investors Escape From Bitcoin For example, if there are 2 BTC in circulation and the current price is $19k, then the normal market cap is simply $38k. However, if one of these coins was last transacted at, say, $15k, and the other at $19k, then the realized cap would be $34k instead. Now, the Bitcoin “delta cap” is defined as the difference between the realized cap and the average of the market cap. The average of the normal market cap here is taken over the entire history of the crypto (and it’s naturally a moving average). The below chart shows the trend in the different market caps for BTC. The normal market cap still seems to be above the delta cap at the moment | Source: CryptoQuant As you can see in the above graph, the Bitcoin market cap has recently dipped below the realized cap. However, it has still not gone down near enough to touch the delta cap. Historically, the value of the crypto has formed bottoms whenever the market cap has been between the other two caps. Related Reading | Fed Announces Inflation Warnings As Bitcoin Whales Remain In Wait Mode In 2020, the coin bottomed out after the market cap went slightly under the realized cap, but in 2018 the metric even dipped a bit below the delta cap before the bottom was in. This past trend may suggest that the point around the delta cap may be the possible lower bound for how deep the coin’s price can sink. And if so, then Bitcoin could potentially sink to or a little under $15k, before the current cap touches the delta cap and the bottom forms. BTC Price At the time of writing, Bitcoin’s price floats around $19.3k, down 9% in the past week. BTC has gone down over the last few days | Source: BTCUSD on TradingView Featured image from Dmitry Demidko on Unsplash.com, charts from TradingView.com, CryptoQuant.com

Iran makes $10M import with crypto, plans ‘widespread’ use by end of Sept

How to Find the Right Buyer for Your NFT

Uniswap Price Falls Below $9 After It Met With A Sell-Off, What’s Next?

August 10, 2022admin
We use cookies on our website to give you the most relevant experience by remembering your preferences and repeat visits. By clicking “Accept All”, you consent to the use of ALL the cookies. However, you may visit "Cookie Settings" to provide a controlled consent.
Cookie SettingsAccept All
Manage consent