According to the report we’ve come across from Arcane Research, the open interest in ETH in futures and perps has risen to 1.2 million within the last week.

Historically, whenever this (open interest) indicator has seen an uptrend, the volatility of the market has increased. We are amidst the crypto winter, and this added volatility to the market has bound to make many traders weary.

Below is the open interest chart. As you can see, the open interest has been trending sideways for almost a year, and a sharp increase soon followed after the onset of crypto winter when ETH reached $1k levels. It is not at its all-time high at 4.21 million.

The Reason Behind the Peak

After the arrival of the crypto winter and the unraveling of many crypto lenders such as Celsius, many arbitrage opportunities came into the picture, with people buying assets from one exchange and selling them on another. That was the reason behind the previous peak of July 14th. However, this time, the Ethereum future markets are providing massive discounts – meaning that many are attempting to short Ethereum’s fate after the upcoming merge update.

That said, Arcane’s research does tell us that this squeeze won’t be that significant.

Ethereum has been trading at a sideways range between $1.5k and $1.6k currently, with a minor uptick of 1.16% in the past 24 hours. But this isn’t enough to tell us how big of an impact Ethereum’s Merge would make. 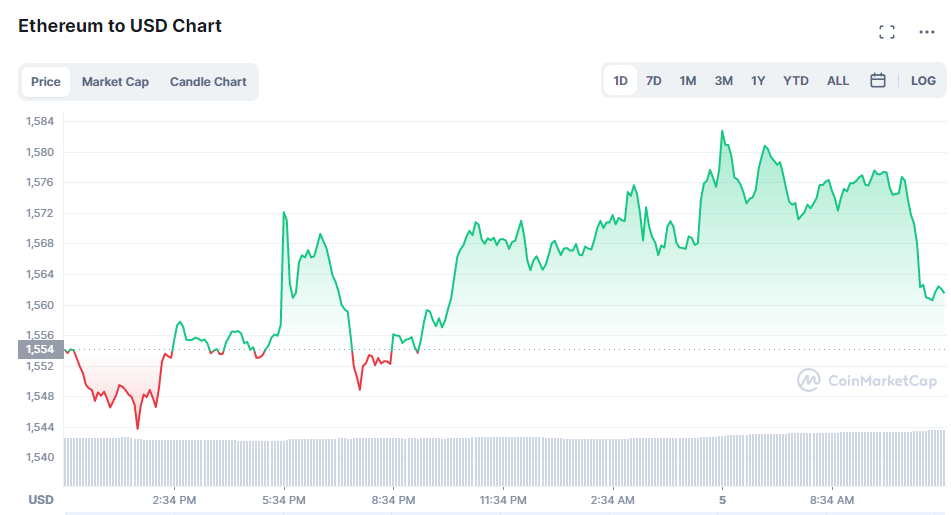 The number of open positions means the volatility is high and can swing the market in both ways. However, there are reports coming in many whales want to jump ship because of their lack of faith in the upcoming update. That said, there are two significant reasons why investors might be willing to short Ethereum futures ahead of the Merge:

If the transition to proof-of-stake turns out to be successful, many of these short positions will close – leading to the open position graph showing a downtrend – signaling that stability has arrived.

The Merge is Ethereum’s transition from a Proof-of-Work consensus mechanism to Proof-of-Stake. The devs behind Ethereum have been planning to make this change since ETH entered the markets. With this transition, the Ethereum blockchain will become more environmentally friendly – instantly cutting down carbon emissions by 99%.

The arrival of the Merge update will make corporate leaders, like Tesla, look at Ethereum as an investment opportunity as, till now, they have stayed away from it because of its energy-hogging PoW mechanism.

Additionally, the introduction of Merge will reduce ETH issuance by 90%- – increasing its scarcity and price.

Change is Coming, and the Market is Reacting to It

“Safely Optimistic” is the right word to describe the current market sentiment. While most are bullish about the world’s best altcoin taking a more ecologically friendly route, they are also apprehensive about its implementation. After all, the past updates have hardly gone without a hiccup.

Bitcoin Exchange Reserve Spikes Up, Selloff Not Over Yet?

On-chain data shows Bitcoin exchange reserves have sharply increased in value, a sign that the selloff may not be over yet. Bitcoin Exchange Reserve Observes Rapid Rise As pointed out by an analyst in a CryptoQuant post, a high number of coins have entered exchanges over the last day. The “exchange reserve” is an indicator that measures the total amount of Bitcoin currently present in wallets of all centralized exchanges. When the value of this metric goes up, it means the supply on exchanges is going up as investors are depositing a net number of coins. As holders usually transfer to exchanges for selling purposes, such a trend could be bearish for the price of the crypto. Related Reading | Panic Vs Pandemic: Crypto Market Is More Fearful Than On Black Thursday On the other hand, a declining value of the reserve suggests investors are withdrawing their coins at the moment. This kind of trend, when prolonged, can be a sign that holders are accumulating, which could prove to be bullish for the coin’s price. Now, here is a chart that shows the trend in the Bitcoin exchange reserve over the past few months: Looks like the value of the metric has jumped up recently | Source: CryptoQuant As you can see in the above graph, the Bitcoin exchange reserve has observed a sharp increase in its value recently. The chart also shows the curve for the “all exchanges netflow,” another metric which measures the net amount of coins entering or exiting exchanges. Related Reading | Bitcoin Faces a New Downtrend Of 28.82%, Why Someone Still Makes More Than 1000% ROI Basically, this metric tells us about how much the reserve is increasing or decreasing right now. As expected, its value also shot up over the last few days. The fact that the Bitcoin exchange reserve doesn’t seem to have changed trend and is still rapidly rising after the crash may mean that the crypto’s price could see further decrease in its value in the near future. BTC Price At the time of writing, Bitcoin’s price floats around $21.1k, down 30% in the last seven days. Over the past month, the crypto has lost 32% in value. The below chart shows the trend in the price of the coin over the last five days. The price of BTC seems to have ben moving sideways since the crash | Source: BTCUSD on TradingView Following the crash, Bitcoin touched as low as $20k, before rebounding back a little to the current levels. Currently, it’s unclear whether the carnage has ended, or if further decline is coming. But if the exchange reserve is anything to go by, then signs aren’t looking in the crypto’s favor. Featured image from Unsplash.com, charts from TradingView.com, CryptoQuant.com

The latest recovery rally in the price of Bitcoin has now slowed down as on-chain data shows signs of dumping from whales. Bitcoin Exchange Whale Ratio Continues To Be At High Values As pointed out by an analyst in a CryptoQuant post, BTC whales are sending their coins to exchanges at the moment. The “exchange whale ratio” is an indicator that measures the ratio between the sum of the top ten transactions to exchanges and the total Bitcoin exchange inflows. In simpler terms, this metric tells us how the whale transactions (that is, the ten biggest transfers) compare with the total amount going into exchanges. If the value of this ratio is high, it means whales are making up for a large part of the inflows right now. Such a trend can be a sign of dumping from these whales, and thus can be bearish for the crypto’s price. Related Reading | Two Months Of Extreme Fear Leaves Crypto In Panic, Bitcoin At $20K On the other hand, low values of the indicator imply whales are making up a healthy part of the inflows currently. This trend can prove to be either neutral or bullish for the value of BTC. Now, here is a chart that shows the trend in the Bitcoin exchange whale ratio over the last few months: The 72-hour MA value of the metric seems to have been high recently | Source: CryptoQuant As you can see in the above graph, the Bitcoin exchange whale ratio has stayed at pretty high values in recent days. Generally, the indicator’s value remains less than 0.85 during bull markets, while it stays at higher values than that in bear market periods. Related Reading | Bitcoin Rejected At $21K, Why A Retest Of The Lows Could Be Positive The current value of the ratio is above 0.90, which means more than 90% of the exchange inflow is from the ten largest transactions right now. This can be a hint that whales are dumping at the moment. Bitcoin attempted a recovery rally over the last few days after hitting the low below $18k, but the run has now slowed down as the value of the coin now looks to be moving sideways. This halt in the move may possibly be because of selling from whales that the exchange whale ratio is signaling right now. BTC Price At the time of writing, Bitcoin’s price floats around $20.7k, down 2% in the last seven days. Over the past month, the crypto has lost 31% in value. The below chart shows the trend in the price of the coin over the last five days. Looks like the value of the crypto has been consolidating sideways over the past few days | Source: BTCUSD on TradingView Featured image from Fábio Hanashiro on Unsplash.com, charts from TradingView.com, CryptoQuant.com

Major Texas crypto miners adopt a proactive approach and close down 99% of their mining operations to fear an expected Arctic blast. A massive winter storm with heavy snow, rains, and flash flooding with thundered storms can damage the power grids of state areas. The crypto miners enjoy low-cost power energy in the state, reducing […]